Here’s the final parts of my blog from our time at San Diego Comic-Con, via Geek Syndicate:

By the time you read this, I should (hopefully) be in San Diego, representing Clockwork Watch and Magic of Myths at Comic-Con.

Yomi will be putting together reports from the show floor for Steampunk Chronicle and I’ll be writing reports for Geek Syndicate, so keep reading here and both of those places for updates!

On July 14th/15th, Clockwork Watch is gearing up for another live event which you can be part, no matter where you are: 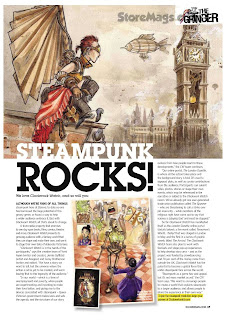 Clockwork Watch: The Arrival has had a couple more reviews in the press recently, both positive:

“There is a lot of ambition here and they do well in not bombarding you with all their ideas at once and keeping the story simple and engaging. The comic has all the things I admire about steampunk: creativity, innovation, enthusiasm and friendliness and I hope they get to see all the work here come to fruition.”


“Hard to say how, or if, Clockwork Watch, as a multimedia concept, will catch on, but the comics version is starting off with vivid characters, in an intriguing setting, and with the promise of visually interesting adventures to come: that’s a recommendation right there, no matter what else does, or does not, materialize.”