Right! I’ve re-done the site a little so it’s easier to buy the books I’ve worked on.

If you click at the link on the top menu bar which says ‘Buy my books’ (oh yes) you’ll be taken to a page where you can buy directly or find sites to purchase some of the titles I’ve worked on. Easy! Please do spread the word and if there are any issues you encounter, give me a shout so I can sort them (…or make them worse).

Here’s the link for you in-page:

Let’s kick things off with a little Bayou Arcana, shall we?

As you may already know, Jen and I have been working on Irons in the Fire for an anthology called Bayou Arcana. Bayou Arcana: Volume 1. Songs of Loss and Redemption is a gothic horror anthology set in a fantastical swamp (in the American South) – you can read more about it here, but the good news is that British newspaper The Guardian featured it in a recent news story covering UK comic books, female creators and the gender gap in the industry. Bayou Arcana has a rather unique set up of being created by all-male writers and all-female artists, so it’s getting noticed by a lot of people and organisations, such as MTV and several other newspapers and magazines across the globe.

You can read the article here: http://www.guardian.co.uk/books/2011/dec/28/women-comic-book-sexism. And the good man Lee Grice (from Small Press Big Mouth) scanned in the pages from when the article was printed a few weeks back: 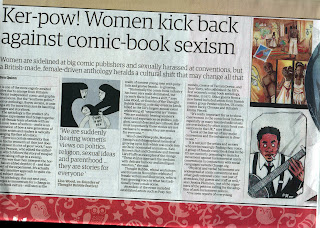 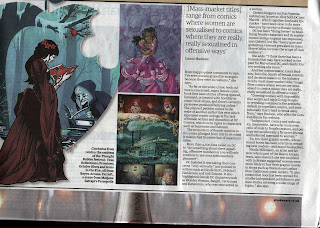 Bayou Arcana is available for pre-orders by our publisher, Markosia, so if you pre-order it before 1st April 2012 you can get £3 off the cover price (£14.99)! This one is going to be popular, folks, so make sure you get your pre-orders in now by heading over to

First up, a quick apology – my last entry (“I have a dream…“) wasn’t actually what I wrote when I last left Blogger. What was published was actually a draft of my original post, which I re-wrote and saved after, yet somehow Blogger took my old version anyway, which is why some of it probably was a little messy. In any case, sorry for any confusion.

And now, the news.

Despite the injured ankle, knee and toe, despite one printing company screwing me over at the last minute, despite my copies of Magic of Myths nearly not arriving on time… the comic convention in Bristol was incredible. A truly amazing experience. Met so many brilliant, new people, had a great time with my lovely girlfriend and friends and even in the face of my nervousness in selling Magic of Myths, everything went really well.

Jen, my friend and artist partner for Butterflies and Moths, shared a table with me (thanks to the very kind Simon Gurr who offered to share in the first place) and has created a great illustrated write up of the experience here: http://jenspiration-now.blogspot.com/2011/05/bristol-expo-2011-weekend-of-awesome.html

Magic of Myths sold a nice few handfuls of copies, which was relieving (given at the start I was uncertain if anyone was going to buy it and I’d go back home with all the copies I arrived with) and everyone was really friendly and supportive – which was great, as I’m not afraid to say I was bricking it, especially during the first couple hours! A bit of context – this has been a dream of mine for many years. Magic of Myths was a story which had been knocking around my skull since about 2003, and represents the fulfilment of a desire I’ve had since I was about 5/6 years old – to have written a ‘full’ comic book to sell. And all of a sudden, here I was, sitting on a table, trying to sell one. Fear and paranoia are pretty much standard coating for thoughts like: “what if I don’t verbally bring the story across?” “what if they spend the money and hate it?” and so on.

And yet, it all came together. And I’m really grateful for everyone who helped make that such an amazing experience.

What made it all the better was that all my friends with selling stands did really well, the general atmosphere was fantastic and lots of plans were made for the future. Thank you so much if bought a book, had a chat at the table or just came over to say hi. If you’re still looking to buy a copy, please head over to the Magic of Myths site which will tell you where you can buy it from. Any problems or questions, just drop me a line.

Along with Magic of Myths, three other projects I’m working on had a little boost, too. Firstly, Jen and my Bayou Arcana story, Irons in the Fire, got some positive feedback, especially on Jen’s artwork. The whole anthology is looking superb so far, and the man behind it all, James Pearson, has some very clever ideas to make it really sing. Definitely something to look out for.

The second project is Butterflies and Moths. Yes, I know I’ve been banging this drum for a while now, but after a productive chat with Jen things may progress a little quicker than we originally realised. Can’t say more than that right now, but when we finalise something you’ll hear about it.

The third one I can say even less about, but Faceless (think Robert Ludlum meeting Joss Whedon and Guy Ritchie in a dark alley and making a beautiful fiction baby together) got a jolt in the arm as well. Needless to say, I’m very excited if things will develop as it’s very early days and anything can change, but…

Right, this post is long enough! Expect some more bits and pieces soon…

So, what to start with first?

As you’ll probably know by now if you’ve been following this blog and the official Magic of Myths site, most of my time of late has been taken up by the miniseries I’ve been creating along with Sergio Calvet, Magic of Myths. It’s virtually complete, but I’ll go into the ins and outs of that project in another imminent blog entry.

So what else is there?

Well, a few things. The first is that last year I was signed up to write for another anthology due for release later this year/early next year, called Bayou Arcana. It’s a collection of stories set around a mystical Cajun bayou, covering all sort of subjects, from the plight and lives of escaped slaves in the deep south to the mythology and lore swirling around in the swampy environment that surrounds them. Expect stories with ghosts, demons, monsters and bounty hunters, as well as expected topics such as prejudice, racism, loss and redemption.

This came about when the man behind Bayou Arcana (and writer of its universe), Jimmy Pearson, gathered up a small selection of creators from the now defunct Insomnia Publications and asked if they wanted to be part of this intriguing project. After a few ums and ahhs, I jumped on-board with a story idea and much to my delight, Jimmy loved it and Jennie Gyllblad (my artist partner on graphic novel Butterflies and Moths) also joined.

So, now we’re in the middle of a short story called Irons in the Fire, a tragic tale of a man trying to find peace and freedom in a world which refuses him it – both on an incidental and personal level. I’m currently scripting the tale, but Jen has already done some rather amazing artwork:

You can check out more lovely artwork over at her site. And if you want to read more about Bayou Arcana, excellent comic book site Small Press Big Mouth has run one or two articles on it, which are well worth a read.

What else? Well, some rather nice opportunities have turned up, although I can’t say too much of them yet – but I’ve been asked to possibly write another story as part of another franchise, which was a very pleasant surprise. Nothing may come of it, but we’ll see – there are a lot of projects I have bubbling on at the moment, including a very unusual vampire satire series and strange prose fairy tale…

Next – some release news on Magic of Myths: season one, which is coming together very nicely. Stay tuned…