Butterflies and Moths – the artistic angle of Angel 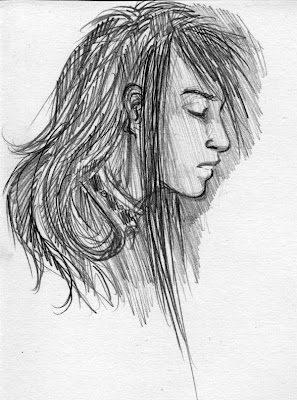 I’ve spent a long time writing in different mediums, but if there’s anything which reminds me why comics/sequential art is my most loved, it’s getting artwork back from your original script and seeing your vision not only realised, but combined with someone else’s vision – creating (what you hope) to be a perfect unison of something far better than you originally had in mind.

Which is my gushing way of saying, graphic novel Butterflies and Moths is progressing like a beautiful dream.

The talented Ms Jen Gyllblad, artist for Butterflies and Moths, is impressing with each page. And with each page it’s becoming apparent that she’s destined for big things – not just because she has clear, expressive line-work, can pull at your emotions with a great grasp for facial expressions and body language, and has a watercolour painted style that compliments the tale so perfectly…

…but because she can tell a story. 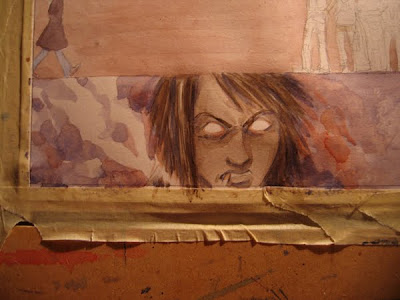 Comic book artists, like comic book writers, can be looked down upon by snobs because of the negative way the medium is perceived by some. But if there’s one thing apparent, it’s that you can have the talent to be a wonderful artist and create an emotive picture, it’s an entirely different thing to do that while telling a clear story in smaller panels, because there’s so much to take into mind.

Case in point. Pages 2 and 3 of Butterflies and Moths. I’ve put both the uncoloured early pages and coloured near finished/unlettered pages together so you can see the progression between the early and latter work, how it developed and how the entire mood can change or be augmented. 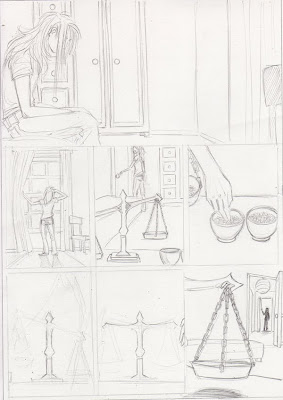 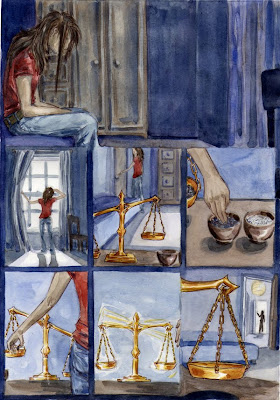 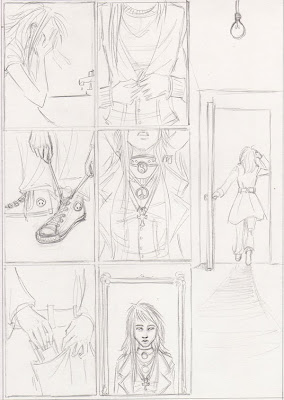 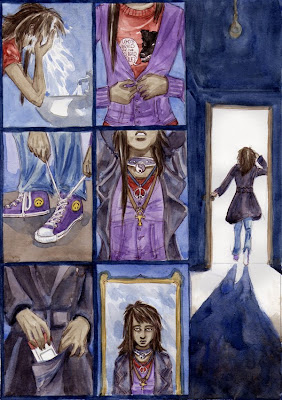 While you can get the sense of something being told here by Angel’s body language and expressions (the latter is only something you get only once near the end to cap off the earlier clues), notice how the colour, lighting and framing of the pages work to give off a certain emotion, through dark blues, purples and browns, which play off two of the brighter hues on the pages (the golden scales and her t-shirt, the former almost popping off the page for a very good story related reason).

Even the panel shape and style play their part – rectangular panels create a rigid conformity and imprisonment that Angel is trapped within, given from the very first panel (which is large but shows Angel very alone, flushed to one side of the page even with space around her).

One thing that wont usually be noticed is the sense of visual story symmetry in just two pages – see how the first page uses one long horizontal panel to start, followed by six smaller panels? Then the next page uses six smaller panels to frame the end of one long vertical panel. So the page flows visually from one to the other to help build the scene, using subtle similarities and differences so your eye naturally combines the two pages (which will be published side-by-side in the book) and creates a full image of what is going on as Angel goes from dark isolation into the light of ‘freedom’. And all of this is created with enough space in each panel for the lettering/text captions to come in later.

It’s all stuff you can take for granted or overlook easily, but seems to come very naturally to Jen, because I’m sure as heck not specifying all of this in my script – she’s taking what I’ve written and making it – in a visual sense – work. And as a comic book writer, you cant ask anything more from an artist.

Believe me, it’s not as easy as it looks.