The Sound of Her Wings

I’ve been officially signed up to write a graphic novel. For Insomnia Publications.

This is a Very Nice Thing.

Maybe not the initial creation of the graphic novel itself – I’ve written novelettes, novellas and two half novels (one 30,000 words, the other nearly 60,000) and despite the general pleasure of writing, each one was occasionally like a cat trying to give birth to a giraffe. So the process of writing it may not be entirely nice. Nor will the subject matter of the graphic novel in question. It may have a faintly pleasant sounding name – Butterflies and Moths – but it’s a tale about a person who finds herself trapped in a very real purgatory, pinched between life and death and forced to make terrible, life-changing choices more often than a human soul should have to.

Which is kinda bleak. Hopefully also engaging, entertaining, thought provoking and slightly, ever so slightly amusing, albeit in a dark, gallows humour way. But definitely bleak.

However, being asked to write a graphic novel? Yeah, that’s nice. Kinda… amazing feeling. Incredible, even.

Butterflies and Moths has no release date yet and is still very, very early in its creation, but as time goes by I’ll detail elements of it, building to its eventual release – the artist drawing it, what it’s about and other tidbits. Just know what I’m spectacularly happy (more so when you consider the 2-year-long and difficult path it’s taken to get to this stage, which I’ll talk about at a later date) and hugely honoured to be doing it – and when it’s released, there will be cake. I promise.

In the meantime, you can get a glimpse of what to expect from Butterflies and Moths in the imminent prequel, Fragile, which will be released in Insomnia’s forthcoming anthology, Layer Zero: Choices.

Fragile is about a recently turned 18 year old girl called Angelica, thrown into making a dark, terrible decision that will change her forever. How far are you willing to go to help the person that’s most important to you? How much responsibility can one person take? And when is the choice between life and death not really a choice at all?

What would you do if you had to make that choice?

What would you do if your own mother asked you to end her life?

Butterflies and Moths: Fragile (2 page preview – click them to enlarge)
by Corey Brotherson and Ariyana Vidya 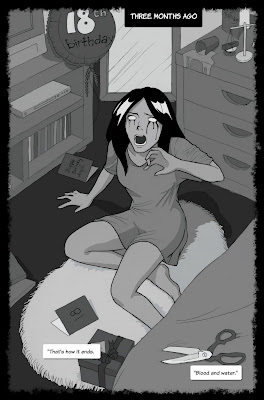 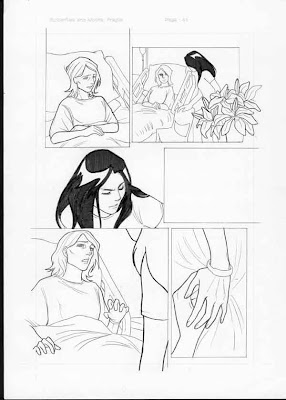 Layer Zero: Choices will be available in May for £9.99 from various online vendors and comic/book sites. You can pre-order directly from Insomnia Publications (Cheque or Paypal), pick up a discounted copy at the Bristol International Comic Expo and the Small Press Expo 2009 for a bargain of £7 OR you can pre-order a equally nicely discounted copy via me – email me or leave a message here and I’ll get in touch with the exact price. Then you can let me know how many copies you want and I’ll put in an order and send the copies to you when I get them myself. But get your order in quick or you’ll miss out on the discounts and have to buy them at regular shop prices…

May will also see the release of Insomnia’s brilliant big titles, Cages and Cancertown, the latter of which has picked up a fantastic foreword from comic book legend, Bryan Talbot. You can read more about that, those books, and the official announcement of Butterflies and Moths right here.

Thanks as always for reading, and see you again soon…