Okay, my feet are a bit back on the ground now after a manic couple weeks of catching up. Hope you like the slight reshuffle of the site – I thought it was about time for a change, which has given me chance to fix a few broken links and add a few more new friends to my list of collaborators and conspirers to reflect 2008’s direction for my work.

My update below was actually part written when I was staying up north in Scotland with family in the first week of Jan (see, I’ve been writing still! I may not have put it online, but…), but I thought it still applies to my general frame of mind and retrospective of last year/thoughts for this year. So it may seem a little off time-wise, but the sentiment remains…

‘Happy New Year. Apologies as usual for the lack of updates on my part – my laptop problems still persist past a couple repairs, but in-between the large number of crashes I’ve had to deal with (there’s likely to be around four just as I write this) I’ve now got the means to back my stuff up across several sources, to ease the pain of repetitive restarts.

So, 2008. Hope you enjoyed your NYE celebrations and aren’t still suffering the consequences. I can’t honestly say the year has started too well, as a number of things have happened in the infantile 2008 that have made me either angry, nervous or -at the very least- unhappy, but hopefully this will pass…

Looking back over 2007 it didn’t take long to realise that it’s been a strange year. To say the least. Lots of good things, a fair share of bad, and thankfully a lot of progress, even if it’s gone from leaps and bounds to baby steps within the space of months. Such is life.

The big thing was, naturally, moving from Birmingham to London (again) as consequence of going back to full time employment from being self employed the past two years. As reluctant as I’ve been to do either, it’s turned out to be a good decision. I’m still not a fan of London, given it’s too overcrowded, too expensive and too sprawling for my second city tastes, but my new job is going much better than I could have imagined, especially as I was very hesitant to re-enter the games industry full time again after being fairly disillusioned with it having been in it so long.

Not to say the past two years as a freelancer have been a waste. I’ve made some brilliant friends and contacts in both the games and fiction industry that I wouldn’t have made if I was still full time, and my fiction writing has improved immeasurably through the number of scripts and prose I’ve done too. My first and subsequent professional scripting jobs wouldn’t have even been an option (through both a lack of confidence and time) if I hadn’t taken the freefall freelance dive, and I doubt I would have completed the dozens of stories I’ve done either, since.

One thing that has also been invaluable is learning what it’s like to live the life of a freelancer, which is damn hard. The lessons learned have definitely made me wiser and more experienced for it, and while it’s been extremely tough at times, two years of freelancing have done me good for my aspirations (although not for my social life, money or sanity). All that said, going back full time when I did was the right decision, and hopefully the seeds planted in the freelance life will bear a bit more fruit this year.

Most of which will be regarding my fiction, which should make 2008 something of an influential period. I was blessed to work with a few brilliant people in 2007, some of whose work you’ll see in the next 12 months. I’m afraid of naming all of them as if there’s one thing I’ve learned in the past 2 years is that the publishing world moves with the speed of an arthritic slug and chances are there will be delays and other problems stopping a release. In any case, of the 6 series’ I’m writing, 2 should get their first parts launched this year. If I’m lucky, 4 of them will see daylight, although that’s unlikely as various circumstances need to fall into place. The chances of all 6 launching this year are about the same chances of England winning Euro 2008. And if you’ve been following football you’ll know how painfully impossible that is. But hey, two REALLY talented artists have recently agreed to work with me, one on a series, the other on a short story, so fingers crossed – 2007 has been a mixed bag of working with several amazing artists (some of which you’ll find links to in my updated Link list on the right) and being let down by at least twice that number. 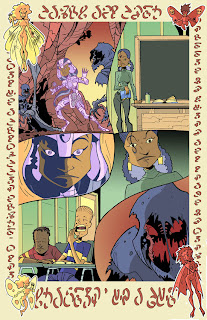 One of the reasons I’m smiling through problems of late.

On the prose front, Silly Games (one of my novels) is half done, which means I’m half way behind my schedule. The plan was to finish it to coincide with 2008, but half way in the year I got stuck behind my move before my laptop crapped out and made procrastination even easier. Now I’ve got numerous USB solutions to backing up my work, I’m hoping to get back on the rails and finish the novel for the year. Easier said than done, but the excuses are less and with the fantastic Crooked Little Vein (Warren Ellis) and JPod (Doug Coupland) providing plenty of inspiration, as well as the regular trip to work giving me ideas my notebooks are getting too full to put things off any longer, broken laptop or no. If there’s one thing I’m grateful to London for, it’s that the average day can turn up a myriad of unintentional muses, from the predictable break down of a Tube line to that guy who always finds his breakfast in the contents of his nostrils. Ah, London, sweet London.

Other random musings from 2007:

– I was asked to be a Godfather for the second time in as many years, which was extremely surprising, if worrying. I’m not sure if my eccentric influence should be allowed to spread further than it already has. 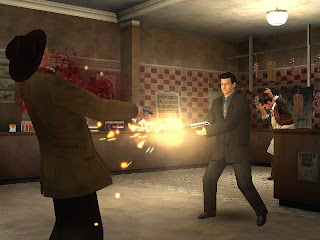 The Godfather: Blackhand Edition on Wii is one of the best games for the sys– oh. Ah. *Ahem*

– Heroes came to a premature end in Season 2 due to the (very justifiable) writers strike that’s currently going on in the USA. The Season was about as uneven as it came, although nowhere near as horrible as some may have you believe, nor as slow – it was about the same pace, if not slightly quicker than Season 1. That said, it had many problems with pacing and plot which will likely have a fair few fans scratching their heads or just being plain annoyed when it airs on British TV this year. Flawed, but enjoyable, in my opinion. Prison Break, on the other hand, had a spectacular 3rd half-Season, with its constant surprises, high tension and brutal deaths. If you grew disillusioned from the patchy Season 2 or just curious, it’s worth your time. 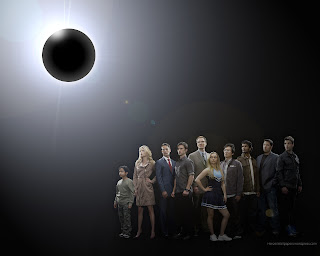 It wasnt as bad as everyone says… really. It wasnt great by any means, but…

– Hip hop had a decidedly average 2007, with very little in the way of highlights despite decent (if only decent) efforts from Kayne West and Jay-Z. For me, the likes of Median, Little Brother and Blu & Exile stole the show with sterling albums, especially the latter who created the wonderful Below the Heavens; a refreshingly unpretentious, bass and string driven album. Kidz in the Hall continue to improve too, underlined by their wonderfully positive track and now reworked campaign song for Democrat/US Presidential candidate 08, Barack Obama; the appropriately titled Work to Do :http://www.youtube.com/watch?v=hJWNW3g6Blo’

Back to the present tense (let’s face it, if you’ve made it this far past the above Wall O’ Text, you may as well stick it out…) – there’s lots more to say, promote and generally talk about, but we’ll be getting to all that in due time. I’ll be updating this a bit more often than the last few months (not really difficult given my current record) and with the sheer number of projects on the go promotion is a must, anyway. Year of the pimp – grab your hat, cane and goldfish bowl shoes, son.

Thanks for sticking with me and all the best for your 2008.