Games column: Why the sky’s no limit for Mario Galaxy and Wii 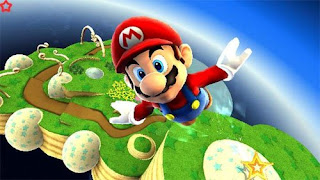 At this year’s E3, a cursory look around the internet yielded an interesting popular opinion:

Super Mario Galaxy was one of the games of the show.

This comes from people who’ve played it as well as those who have watched the numerous videos of footage and demonstrations. It’s a rather telling statement on its potential quality that so many are holding the Wii platformer in such high regard through its generally surprising nature and overall charm – taking in mind other titles, such as Metroid Prime 3: Corruption, Killzone 2 and Mass Effect were stunning gamers as well.

Given the pedigree of the Mario franchise, all this may not appear to be a massive shock. But Galaxy was somewhat lost in the build-up to E3, pushed aside in favour of numerous unannounced titles and other high buzz games. Not only that, but it’s clear the rather mixed reception of prequel, Super Mario Sunshine, also had a negative effect on the anticipation of Galaxy. It’s fair to say Wii’s first true Mario game was expected to be perhaps more of the same but better, with whatever new possibilities the Wii remote would offer being the crux of its gameplay. But as it turns out, Galaxy is much more than that, exciting on a level that already exceeds its predecessor by some margin and breathes life into its genre in fresh and previously unexplored ways.

It’s significant that NOA President Reginald Fils-Aime declared Galaxy rather slyly as “the first worthy successor to Super Mario 64“. Fan-pleasing hyperbole it may be, but it’s still an admission that the Nintendo 64 original’s follow-up failed to meet expectations, something Galaxy aims to rectify with its smaller, more focused levels (although still allowing for large sprawling efforts by the sound of things), innovative use of gravity and inertia, and a return to ‘Mario suits’ that were so often the power-up of choice back in the days when the moustachioed plumber was merely a 2D sprite. The disregarding of Sunshine on that level, as oblique as Fils-Aime was on the subject, is a watershed for the Super Mario series, a thinly veiled statement that Nintendo will not let such an important intellectual property fall below whatever high standards it deems, again.

However, such demonising of Super Mario Sunshine is arguably unjust. The GameCube title had its fair share of problems, but it was hardly the fall of the franchise, as the occasional hardcore fan may declare it. If anything, Sunshine was victim to a handful of major factors, some of which it had no real control over. 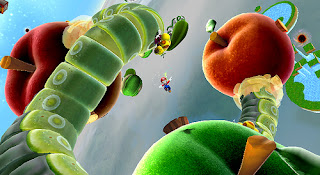 The first of such was that it had to follow Super Mario 64, which to this day remains one of the most highly acclaimed videogames in the medium’s history. Whether or not you feel this is deserved is beside the point; the N64 killer-app did something which was believed near impossible and brought the previously two-dimensional platform genre jumping into 3D without skipping a beat in terms of gameplay, design, mechanics and atmosphere, while still remaining distinctly Mario. It redefined a whole generation of titles and paved the way forward, while other games of the era (such as Sony PlayStation’s Jumping Flash!) were still only taking baby steps. Sunshine came out with the same hopes wrongly pilled upon it, when a whole era of 3D platformers had already stolen the genre’s thunder and was making headway in different directions. With designer and Mario brainchild, Shigeru Miyamoto, taking a less hands-on approach as well, Sunshine had an uphill battle from the start, compounded by ultimately being less than stellar on arrival.

Secondly, there’s no denying Sunshine was rushed out in comparison to typical Nintendo games, something that was symptomatic of some in-house GameCube titles. N64 suffered from its lack of third-party support, which left it relying on first and second-party offerings for a long duration of the machine’s lifespan. The problem with that being Nintendo was not the sort of company to push out anything before it was considered ‘ready’ which usually meant around a year or two later than everyone else’s projection. But the common factor that linked all these perennially delayed titles was that they were worth the wait and typically the best of their respective genres.

However, the backlash of N64s long delays without any big name software, especially in comparison to the third-party favourite, PlayStation, meant come GameCube’s launch Nintendo had took to task its own long development times. The constant bellyaching of fans who wanted their Marios and Zeldas et al as quickly as possible had an effect on the big N, which subsequently rushed its favourites to the shelves to stop more moaning and try and beat PlayStation2 to the punch with a succession of heavy hitters. What happened instead was PS2 steamrollered over GameCube anyway and the little purple box became victim of first-party efforts that lacked that Nintendo-driven sheen and patience. Wind Waker was among the most notable of them (and here’s a fun fact for you; it was me who personally asked Miyamoto what was left out of the game, which led to the previously unknown revelation that at least two dungeons were missing from the final product), while Mario Sunshine became known not for its flashes of inspiration and generally excellent gameplay, but its bugs, uneven level design and rather patchy game mechanics. None of which ruined the platform romp as much as we’re sometimes led to believe, but certainly left many with a bad taste in the mouth. And in an age where we’re quick to neglect all the qualifiers between extremes of ‘genius’ and ‘crap’ (to use a more publishable euphemism), Sunshine was labelled all too readily in the latter.

Which leads me to the third factor of Sunshine‘s rather painful dismissal; the subsequent backlash which was disproportionate to the actual flaws of the game. There’s no doubt it wasn’t the game many wished it was, but the witch-hunt furore that followed Sunshine‘s release managed to drown out the sparkles of quality the platformer brought to the table. With such a high lineage behind it, the criticism was that of those who expected more from their Mario titles, rather than that of a normal videogame, and so like a gifted child who suddenly got a ‘B-‘ instead of an ‘A+’, Sunshine was treated far worse than it arguably deserved. 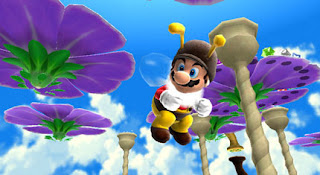 All of which helped the imminent Super Mario Galaxy slip under so many radars but also made sure Nintendo put as much effort into recapturing some sense of freshness and ‘magic’ experienced in Mario 64. Judging by the reactions of those who saw Galaxy at E3, the only thing that came close to matching its imagination was the refreshing and wonderful looking LittleBigPlanet on PlayStation3, and even that seems to have been near-swallowed by hype of Mario’s latest outing.

It’s easy to underestimate Galaxy‘s importance as a Wii title. Mario may not hold the same sway of influence he used to, but a good iteration of the long running series carries sales and critical influence. Not that Wii currently needs anything to keep its strong retail momentum, but a superlative Mario game signifies a number of things. For one, it shows Nintendo is utterly serious in maintaining a potent sense of value for its hardcore catalogue, something all the more imperative given the number of Chicken Littles declaring the sky is falling and it’s all Wii Fit‘s fault. Given both Fit and Galaxy are both Miyamoto’s priorities, all eyes will be watching for any hint of production bias for either, to claim casual/core gamer ‘victory’. Should they equally emerge as killer apps, it may help allay such snobbery in the short term, especially given the demands on Galaxy to be nothing less than amazing.

Also resting on the shoulders of the space-bound title is the prospect of it being a showcase for the Wii remote and indeed, Wii’s capabilities on a whole. From what’s been on show, there doesn’t seem to be a vast amount of action which screams ‘Wii remote justification’, but that’s questionably beside the point – in its use of attacks and a two-player style function, motion control appears to compliment the gameplay rather than boss it, which may leave some crying “gimmick”, but having the balance to keep Mario enthusiasts happy while not alienating new gamers is tricky. If it means shifting certain moves to the remote, then as long as it feels intuitive (which it apparently does) then complaints should be fairly low.

What’s more clear cut is the reaction to Galaxy‘s visuals. Impressive on many levels, the most common utterance that seems to emerge after exposure to the game’s beautiful, colourful and dynamic look is something along the lines of “Wii can do THIS?” Oh yes, Wii CAN do this. And once Nintendo launches its anticipated title, there will be fewer excuses for developers to hide behind in making their titles look as half-hearted as some have. Superb art direction aside, Galaxy raises the graphical bar high and proud, proving the little white machine can indeed perform optical wonders under the right guidance, which will hopefully usher in a second generation of great looking Wii software. Pre-launch jitters and time constraints are a thing of the past, and if Galaxy (along with the great looking Metroid Prime 3 and Smash Bros. Brawl) doesn’t spur straggling third-parties into pushing themselves, little else will. 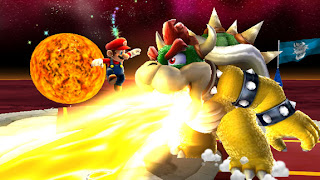 Alas, therein lies the irony of Super Mario Galaxy‘s existence: to help show the way for many, in a glow that few may not be able to compete with in the first place. Should it fulfil its potential, Galaxy will not only be a headliner for Wii, but an ambassador for gaming in a climate where photo-realistic High Definition visuals, scapegoat violence and an ever changing market focus are on the tip of tongues everywhere. And while it bypasses all those buzz topics with its cartoony style, happy-go-lucky tone and experienced gamer core, it’ll still be likely used for the argument that third-parties don’t stand a chance against the Nintendo juggernauts.

It’s an argument that’s starting to bleed holes of light via Sunshine‘s failings, recent retail evidence and the increasing quality of rival titles -across all formats- that overshadowed Nintendo’s own, pre-E3. If Galaxy succeeds -and early reviews, such as 1-UP’s 9.5 rated example, appear to suggest it’s more than possible- of it will be through its own persistence for excellence, but as long as others put in the effort there’ll always be plenty of space for more like it.