Pay no attention to the man behind the– hey, where did the curtain go?

I’ve given up trying to do this on a regular day, now.

Life at the moment is a little… sporadic. And as usual, when so much is going on in my head and around me, there’s little time to settle into routine. So from this point, I’m going to just update this whenever the heck I feel like and let nature take its course.

However, I do feel a little bad for letting things linger longer than I intended, and there’s been a strange influx of visitors the past week, which suggests fate and luck are gently blowing in an amiable direction. To that end, the next couple updates are going to be VERY early preview bits, all things going well.

My originally planned preview was an extract from a novel half written (currently around 30,000 words) and something that taps into a rather personal feeling that’s particularly relevant to me this month. But after mulling it over in my head for a bit, I’ve decided to hold on to that and save it for a later date. It’s probably a little too raw, currently, despite the fact it’s not autobiographical – it’s just the fact the extract itself taps into thoughts and emotions that are quite negative and sensitive, and right now there’s more than enough of that to dwell on, outside of fiction.

So instead (in an effort to be a bit more positive), I’m going to break a personal rule and show off an (unlettered) page of a project that’s a long way off being unleashed upon the world at large, yet in a state of near completion all the same. The title of the story, its artist and where it’s going to be published are going to remain totally off limits for now, but in the air of mystery that will surround it, I’ll offer the pages of script that accompany the artwork (which is utterly beautiful and unique in its animation cel-like quality – I’m very excited about working with this artist; he’s brilliant in every way possible).

Naturally parts of the script will be changed, for the above reasons, but so you know exactly what’s going on, I’ll keep the panel descriptions as a glimpse into the workings of how a comic is typically put together when the writer passes the work over to the artist. In fact, I’ll take each panel separately, then show you what the whole thing looks like in full, after. It’ll probably be a bit jarring, and the ‘panel jump’ effect (unique to comics) wont work, however, that’s one of the reasons this is an early preview rather than a proper one. But I’m sure you get the idea – and the great artwork will likely distract you from such problems (in a good way), in any case…

As usual, no recreation of these without my permission, thanks.
PANEL ONE 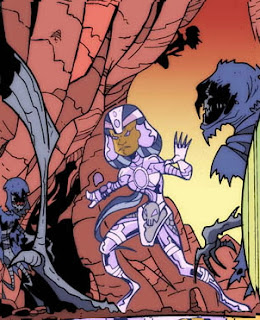 We see Eve, in full gear, unarmed. Just in her glowing armour. She’s looking slightly nervous, but in a readied martial arts stance. She’s surrounded by four darkly cloaked figures, none of which we can see their faces, but they’re beings of shadow. Wraiths of sorts. We can see their shadowy finger and wrists from the sleeves. This is a dusky mid-morning, in a barren plains setting, although a cave lingers ominously in the background. Eve’s goal is to get to that cave, but it seems being suddenly set upon by this gang of wraith-like beings has stopped her and now she’s having to deal with it. 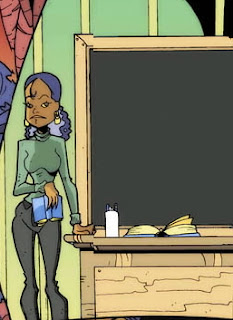 Change over panel. Same angle and framing as last panel, but this time Eve is in a classroom and looking smartly dressed, but quite stern, with her class in front of her. She’s talking, but we’ll keep the words in caption form as to not confuse the cross-overs and relate everything to present tense.

EVE CAPTION:
“Now if you’ve done your homework you’ll have some examples of where perception and reality wildly differ — 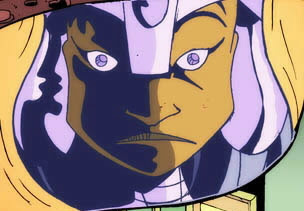 Back to the fantasy costumed Eve, but closer in. She’s still holding the same stance as Panel one, and showing determination on her features, although there’s a clear sense of apprehension in her eyes. 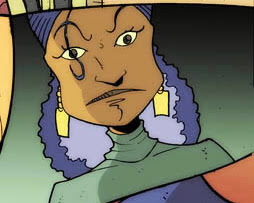 Back to the classroom, same angle and framing as Panel three. There’s anger in her eyes, the look of a pissed off teacher.

EVE CAPTION:
“Of course, many of you haven’t. 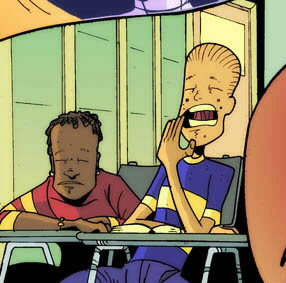 A look at a few of the students (13 years old). They’re a mixture of boredom and disinterest. The central one is yawning theatrically. 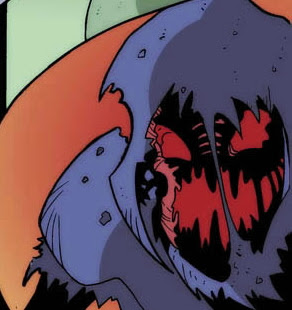 In the fantasy world, we see one of the wraith’s head on. Much like a mimic of the student in the last panel, we see a red light glow/spark from where its eyes should be in the hood. That and a widening mouth of red, as if it’s yawning, but the bright red of the light its mouth and eyes emit in the remaining darkness of the hood makes this seem extremely threatening. Frightening, even.

EVE CAPTION:
Not the first time I’ve felt like an ass. 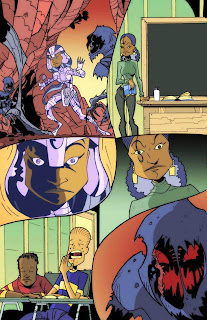