Giving the dog a bone

Apologies on the really late update – time is not on my side right now and I’m working away on-site for a bit which is going to make things difficult. So consider this a temporary hiatus until I can juggle things around.

As a slight way of apology, I’m throwing out a very VERY early preview of one of the strips due for publication soon. This is just one in a series of them, written by myself and drawn by the brilliant cartoonist, Stephanie O’Donnell.

The series is called L33tspeak. It’s something that’s been knocking around for the better part of two years now, but this is the first time they’ve been given the chance to air. It’s all videogame related comedy, so if you’re not too savvy on videogames it may well pass you by, but ’tis the nature of niche comedy. It’s a 3-panel series, in tried and tested newspaper strip style, which is terribly difficult to write for (first panel = set-up, second panel = joke pre-emption, third panel = punchline – ‘economic pacing’ doesnt even begin to describe it) and caused many headaches to get into the mode of. And to be frank, ‘pure’ comedy is intensely difficult to write anyway; I don’t know how so many pros do it. I’m likely to do a detailed breakdown of how the whole thing came about, once it all gets released.

But anyway: preview, owned by myself and the lovely Ms. O’Donnell, so no replication without our permission, thanks! Click on the strip to enlarge it.

See you in around 9 days… 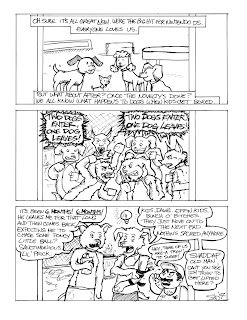