And so we reach the final character preview from Bad Luck Inc., Democritus. 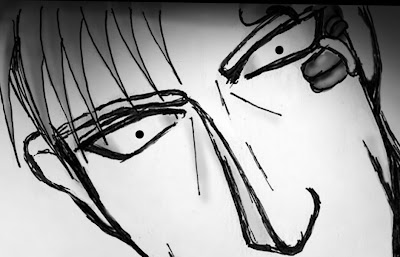 There’s less here on Democritus than the other two characters through the fact he’s the most enigmatic of the cast in both appearance and history. He looms by MinRep’s shoulder like an ominous cloud, only speaking when he needs to and what he often says is only what’s needed for the time. In a way, Democritus represents the core of Bad Luck Inc. as a company; remorseless, pragmatic and utterly by the book – very literally, in many ways. 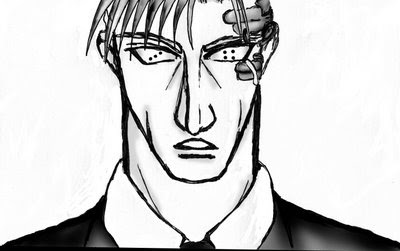 One thing that should be pointed out as a clue to Democritus’ nature is his eyes. Passing inspection should show that they’re obviously not ‘normal’ by any means. His script description is as follows:

“…(Democritus) is the taller figure, a well dressed, sharply suited man of very pale white skin and silver hair. His eyes are totally white, no irises at all, and he wears a nonplussed expression. But his eyes change in every panel he’s in…” 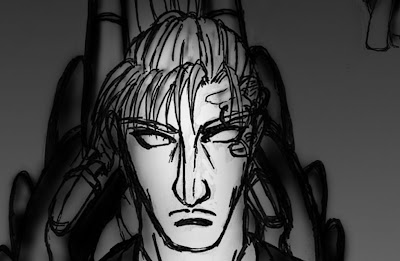 I’ve cut out the reason why they change in each panel, but they offer significance on several levels through what they show, literally, symbolically, thematically and spiritually – the latter offering a question: if the eyes are the mirror to the soul, what does Democritus’ eyes tell you about his existence?