Something for the weekend. Or week. Or three… 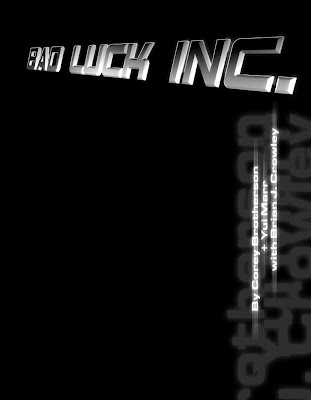 That’s all that stands between now and the release of Futurius’ Tales From the Plex Anthology Vol 2.

Official release date is April 22nd, (which also happens to be the Editor’s birthday) so the promotional drive is building from a distant rumble to an inexorable storm for the end of the month.

At the moment I’m still slogged with a ton of stuff (yes, still), and the number of things that need to be done are growing. I’ll be doing interviews with some other writers on the anthology for the run-up, so that needs to be done as well as my own previews for Bad Luck. That said, I’m getting off quite lightly – the production for the anthology is MASSIVE and the poor Editor has been stuck doing 18 hour days trying to get it all sorted for release.

So, with three weeks to go, what I’m going to do is complete the final character preview as planned next week, follow by several fully lettered pages for the last 2 weeks. Having seen the final product now on my laptop, I’m very pleased with the whole thing. Of course, this doesn’t mean you’ll like it (although obviously I hope you do), but it’s a fairly big thing for me to see what started off in my head be transferred to someone else’s pencils and then back on to page for public consumption. Considering I’ve wanted to do this since I was about 13 -shortly after the realization that I wanted to be a games journalist/writer, and possible an animator (my artwork is sadly far too poor for the latter to ever be fulfilled)- I’m ecstatic. That I’ll see absolutely no money from this at all doesn’t really matter. I only hope the rest of my stories take off as well and this one is decently received.

That’s all for now, really. End of the month grind means I’m back to work as soon as I press ‘publish’ on this entry.

Final character preview next week and then you’ll be able to actually READ the first few pages of Bad Luck Inc. in their entirety.

Catch you in seven.