This is the main character of the story, Neon, and our entry into a world of corporate hell.

Drawn by the excellent Yui Marr, Neon is has gone through a bizarre evolution in the process of Bad Luck Inc.‘s conception and eventual realisation. If you’ve spoken to me about this story, you may know that this whole story was created by a dream I had.

Where I was working for Satan.

And wanted to leave.

This dream was among my more… lucid, examples, but had enough elements clear when I woke to allow me to create a sci-fi based story from it. The question that emerged in my head was, ‘what if you were working for what was considered The Ultimate Evil and wanted to leave?’ In my dream, Satan was naturally unhappy about me wanting to escape his employ (I was fed up with killing people, apparently) and sent his best killers after me to make me a very dead example of How Not To Do Things. So in true action movie style, I grabbed my mark, told her I didn’t want to kill her and work for The Devil anymore and tried to escape, leading to a merry chase of death and destruction. I work up before the dream could enter its third and final Act.

So, my mind played with this a while. A literal Devil would perhaps be relatively inconceivable for a short sci-fi based story such as this, but what if The Devil was a corporate business? The biggest one on the globe? Controlling a large section of society and politics, and as such, the world?

Hell, I’d not too long quit my job and it’s a relatable theme to many people. The metaphor is certainly easy enough. So why not?

How about creating a company that encapsulates the worst aspects of corporate life and control – a company that helps fix elections, creates diseases only it has the cure for (and so forces an endemic which it controls profits from), controls the stock market growth and crashes and basically acts as an umbrella corporation to every conspiracy theory out there?

What if there was no such thing as coincidence? How far does the concept of Free will and Fate/Determinism go when a group of people control so much? Is there really such a thing as ‘luck’ when they toy with the elements which emcompass it?

And so the corporation, Bad Luck Inc., was formed.

Neon represents a person struggling against the machine – doing something that we’ve all done at one point or another – reaching a point where we stand up and say “I’ve had enough.” But what happens when you say that to the largest and most controlling conglomerate on Earth? 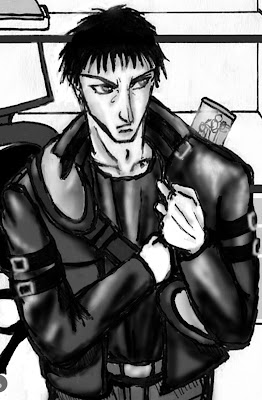 There’s obvious parallels to The Matrix here, which I decided to play on very very early in the story’s creation. Neon was actually called ‘Muon’ at first, as to allow for an obvious futuristic slant, but when I realised there was something I could use thematically and visually, I changed it to play with reader expectation; a man trying to escape a world he no longer believes in? Free will vs. Fate/Determinism? Hell, there’s even a slight look of Keanu in Neon. And we’re only one letter off “Neo”, right? Yup. And it’s all for a reason, which I’m obviously not going to divulge here. The Wachowski brothers will not be knocking on my door with lawyers in tow, though – I just like messing with your brain on multiple levels. 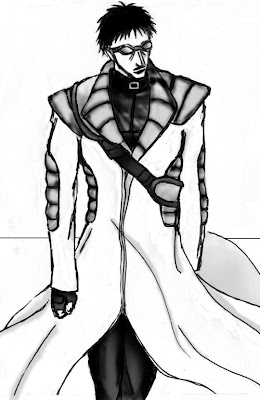 Neon is a Human Resources drone for Bad Luck Inc., working for them over 10 years and has finally decided he’s done with the company. So, with the help of a industrial espionage handler, he’s given the tools to extract himself; security passes, building schematics and a gun. 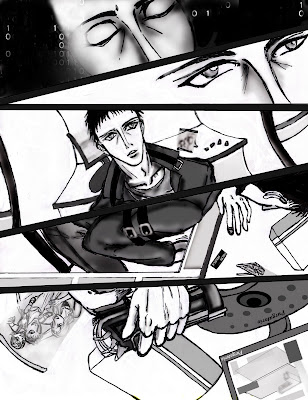 My script description of Neon on Page one is as such:

“…a man aged around 35, mixed race, handsome. He wears smart clothing, but as the reader is about to discover, we’re in the future, so nothing too close to what we see now. He sports a tattoo just below his collarbone above his chest which we can see says “6:7″ and a subtle ear piece, which he’s touching to hear his instructions.” 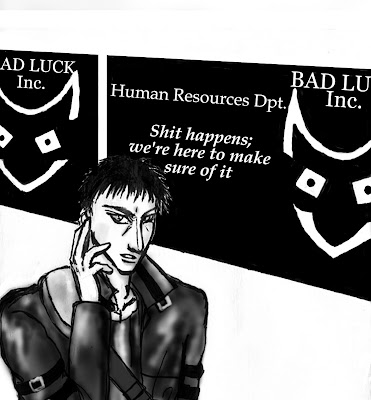 Neon is blessed with a wife and child, both of which have forced him to make a decision to leave – he simply doesnt want to be part of a world like this any more, nor does he want his daughter to grow up directly in a place which leeches you of your morals and soul. Naturally it wont be as easy as that, but he’s had enough of helping humankind into the self destructive hole it’s comfortably resting in.

Something worth noting, however. Neon has been working at Bad Luck Inc. for over a decade. And only now finally done something about it. There’s a question mark over how much of a person’s soul is already eroded by being in that sort of environment for so long before finally taking a moral stand.

If you’re unhappy with your job, how long do you wait before doing something about it? Does society pen you in and force you to stick it through because of your family and mortgage? Do you stay unhappy to keep within the established rules of that society? How far do you take personal sacrifice over personal happiness? Is there a line?

Do we even have a choice at all?

More previews in the coming weeks.