An interlude in the eye of the beholder 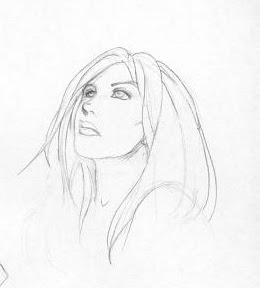 I wasn’t planning this, but I thought: the hell with it. Why not share.

There’s a couple things happening with my comic work this week, one of which I cant quite publicly divulge yet until the ink dries (but it’s good news), the other is what you’ll see here.

As previously noted, I’ve stumbled across a new artist to draw one of my full 22-page story scripts that will hopefully be published by the end of this year. And I have to count my blessings, because I’m very lucky with who I find when I actually discover someone who wants to work with me, because they’re amazingly talented.

The person who will be drawing Butterflies and Moths, is called Ariyana. She’s not worked on a comic fully before and is extremely humble about her talents, when in reality her artwork has little need to be humble at all.

She recently sent through her first batch of sketches for the main character of Butterflies and Moths; Angelica. 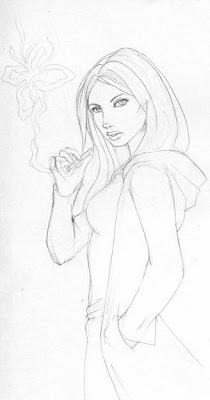 They’re an utterly beautiful batch of sketches and do what every writer hopes their artist partner hopes they will do – capture the essence of what you wrote in the script. In this particular case, Ariyana more than ‘gets it’; she’s totally captured the character on her first go better than I ever could have imagined. I describe Angel in my script as such:

“She’s healthy and very pretty/cute looking, but wears a look of being worn and tired, a strong young woman who’s had to deal with a lot of pain and tough decisions, pushing by each day as it comes.”

And subtly, that’s all there in the numerous sketches. Posture, body language, eyes, expression, little details that make up the complexion of character, captured in several stills. It’s not easy to be able to do this sort of thing, because facial expression in naturalistic drama based comic books is a bit like acting. Make things too obvious and it becomes hammy because the little things count for larger aspects. Stuff like the way Angel holds her cigarette, the way she hangs her head and such are all things you can take for granted on first glance, but are deeply important to the tone and feel of the story at large. And if you look at the smoke trail, you get a lovely little touch that’s far more important than first seems, although until you read the story it’s mostly ‘just’ a smart (and unprompted – Ariyana put it in herself, which was a fantastic idea) nod to the title.

Butterflies and Moths is perhaps the most personal (completed) story I’ve written to date. It covers a bit of ground over my thoughts and feelings the past couple years – it is by no means a total reflection of them or my experiences on a whole, but the sentiment behind it is fuelled by showing its readers about the person who I was, the person who I changed into and the question mark of who I will ultimately become. As with many of my stories, it has no easy answers and requires readers to put something of themselves into it to get as much back out. Hopefully it’ll at least make you think.

It’s all a bit early to show anything else at this stage – so I’ll get back to the planned schedule of previewing Bad Luck Inc. in more depth for the next few entries. Consider this a sneak preview of the next major story in-line.

Thanks as always for peeking in.