Bit of a change, this week. Just to mix things up.

I’m still wondering where January has gone, given it’s barely a few days off disappearing again for another year (already the onslaught of Valentines and Easter throw outs are upon us). My schedule has not particularly got heavier, but the number commitments have increased as have the complications. I’ve still yet to print out my slush pile fodder (AKA my novelette, Bad Blood), but I’ve managed to turn out a chapter a week of my newest and latest project while other bits and pieces tick tock along to clockwork routine. I went through a panic the last few days after not properly starting the breakdowns, dialogue and panels of my monthly script after plotting it, but somehow managed to turn it out in just under three days – a 22 pager usually tends to take me 2 weeks. I’m not entirely convinced this is a good thing; I guess I’ll see when I edit it before deadline this week. Although one great thing that came from researching certain parts for the script was that I learned a couple curses in Hindi. Given how stodgy and ‘official laden’ my research has to be for the series on a whole, this was a nice break.

In other random news, my WiiChat columns have caught up so I’m no longer ahead of my publishing schedule, so the latest two can be read here: (http://www.wiichat.com/nintendo-wii-articles/15599-castlevania-pro-evo-half-life-more-wii.html – about certain games’ chances of being made for Wii) and here (http://www.wiichat.com/nintendo-wii-articles/15150-newest-title-wiis-library-blame-game.html – a slightly controversial one of how Wii and videogames are easy targets for cynical ambulance chasers when they become popular).

Speaking of controversy, my previously published comic book review, Spider-Man: Reign #2 has brought with it some disagreement via a rather outspoken young man who deems myself and anyone who liked the comic book I reviewed “ignorant and stupid”. So there’s that and my polite reply back over there: http://www.comixfan.com/xfan/forums/showthread.php?t=41222. Drama!

This week’s artist spotlight has been postponed till next week, simply because this entry is now going to be very picture heavy, with snaps of my weekend away to Nottingham for a good friend’s birthday. While we didn’t end up hitting a casino (probably for the best, given my heavy overdraft) it was a good night full of drinking, eating, more drinking, dirty jokes, more drinking, playing Wii and then more drinking. Oh, then passing out, waking up, playing more Wii and then… no more drinking. I’m pretty tired (that’s “TIRED”, not “hung-over”), so I’m done for now while I leave you with pics from the past 24 hours. Click on them to see a bigger version. 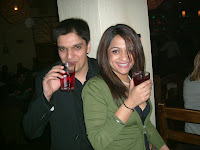