Slumber party at mine (come over at nine…)

It’s been a manic week of work and personal things all over the place, and right now I’ve given myself enough time to write this entry with my feet up, when I really should be focusing on this month’s comic series script. And this week’s column. And the most recent novel project I’m on. And getting my novelette printed for sending. And paying my outstanding bills, writing more reviews, doing research blah blah blah blah blah.

It’s not that things are bad, really. It’s more a case of having so much to do that I’m not knowing which way is up. Normally my mind is so chaotic that if I’m not juggling ten things at once then I’m somewhat bored, but I think my brain is going through its regular maintenance period where even the merest of decisions suddenly becomes chaos inducing. Hopefully brain work properly soon cuz all work no play make Corey something something.

So what crazed missives do I have this week? Well given I’m half asleep as I type, my brain is surprisingly cogent enough to remember my original plans, which are unfolding before your very eyes.

Firstly, it’s been impossible to avoid the Big Brother bullying/racism saga the past 7 days. A couple friends alerted me to the starting of it 2 weeks back, which at the time justified my position to continue not watching. The reason being is that last year both regular BB and Celebrity BB drove me to wall punching fury because of the racism and bullying of several contestants. I’m a fairly placid person, but after witnessing it during those moments I think I started frothing at the mouth. So the intention was to ignore CBB this year (especially when Jade Goody was announced to be taking part) so my blood pressure wouldn’t shoot my blood through my skin and drive me into a seething rage.

What is it they say about Best Laid Plans.

Little did I know Goody’s ignorance (spread by her two vile henchwomen) would reach globe spanning levels. So I watched, I raged, felt more outrage, more rage, slept, raged some more and then cheered when a modicum of justice was done and the British public did the right thing (although I cant help but be worried that 18% still voted to keep Jade in… such reasons are far too scary to comprehend). I’m still not watching CBB every night, as the two henchwomen left (despite their apparent realisation that they’re not very popular and suffering immense career damage) are still capable of making me smash stuff, but I’ll no doubt be watching eviction nights with curiosity. The Jade fallout has suddenly made a lot of people notice THAT REALLY LARGE ELEPHANT standing in the room, but I have enough head banging anger inside me without the cynicism of CBB making me even angrier.

Phew. Okay, back to nicer stuff. I’ve really been wanting to promote my collaborators seeing as they’re the poor souls who have to draw the contents of my damaged mind via the scripts I send them. So they’re deserving of some attention, which I’ll try and do on a week by week basis, depending on if they have sites/easy examples of their work on tap. The first person who steps into the spotlight is Armando Mendoza, who’s currently drawing horror short story, The Twilight Cleaner. Armando is insanely talented and it’s a real privilege to work with him; I would imagine he’ll end up being a big time pro soon enough and I’d love to work on a series with him one day. Here’s an example of his work (hope you dont mind, Armando!): 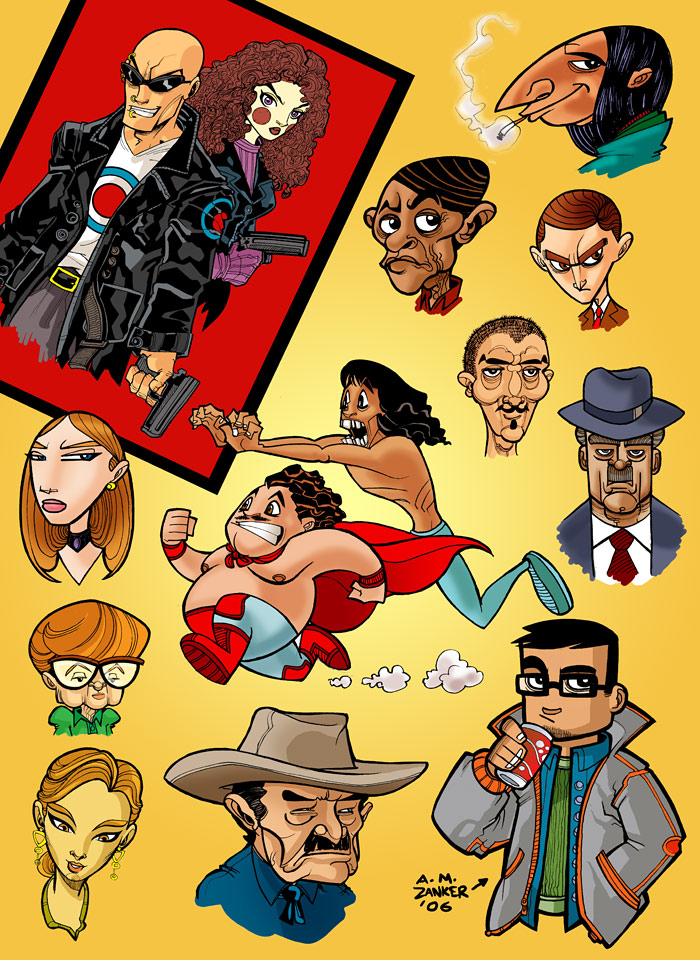 His blog-gallery is over here (http://bocetario.blogspot.com/). I’ll be previewing our collaboration in the coming months (as long as our editor is cool with it).

In my usual personal pimping, I’ve a couple features that have gone up lately, my weekly WiiChat column (http://www.wiichat.com/nintendo-wii-articles/14857-wii-sports-godfather-hotel-dusk-more.html) and a review of Spider-Man: Reign #2 (http://www.comixfan.com/xfan/forums/showthread.php?t=41222) at ComiX-Fan.

I’m sure there was something else I was going to say, but it’s gone. Ah well.