So much for the weekend update

Yeah, had a few problems in getting a weekend update done for about… ooh, a billion reasons. But yes, my Wii was indeed one of them. It’s a great, great machine and enamoured me far more than I expected considering I’ve yet to play nothing but sports and mini games on it so far. I also created my Mii, which I managed to get looking a little like me (although the creator lacked my mini dreads, so I’m wearing a hat… which, in truth, is what I wear when I’m out anyway).

Sorry for the poor quality, I took it with my phone. But I’m sure you get the idea.

But in any case, yeah, Wii is the future. It told me so, in a lucid dream, with its little blue light. Even before I get Zelda in the post. I would have a handy link to the feature I recently did on Wii’s future, but it’s yet to be posted on WiiChat. Next week. Although my optimistic opinions about how the console would be received now feel very vindicated in hearing the numerous stories about how people who usually don’t play videogames are enjoying Wii. In fact, my Mom, who’s not played a videogame in something close to 20 years, played Wii Tennis last night and was so impressed that she told her partner about it, and spent several minutes talking to me about it today about how much she enjoyed the game and what else she could play on the system. Was I amazed? Seriously, you don’t know the half.

At this point, Paracetamol (did you know that word isn’t in the Microsoft Word dictionary? Although it’s US adopted name, Acetaminophen, is. Hmm.) is kicking in. Yes, I’m ill again. I’m lame, I know. The throat infection is trying to come back, as eerily prophesied by my friends this weekend who told me there’d be a chance of the illness resurfacing seeing as I didn’t treat it (and therefore only pushed it below the surface rather than cure it). I can be a horrible hypochondriac at times, but sadly my throat hurting like hell and pain while swallowing is not something I’d wish upon myself, intentional or no. So now I’m looking at the unused prescription my GP gave me last week if the flesh-in-gullet problem suddenly reoccurs tomorrow. Although I’m hoping my immune system, lots of vit C and strepsils can flush it out before it gets that bad again.

The most important thing this weekend was that said friends -Tim and Lucy- visited with my ever-lovely (and growing far too fast) godson, who makes his blog debut right here, right now. Take a bow, Preston. 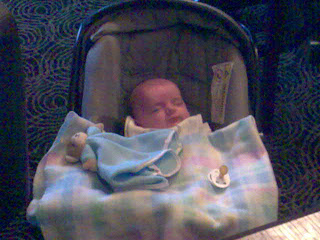 Oh and before I go, I’m a feature reviewer for ComiX-Fan this week, with my review for Spider-Man: Reign, so feel free to take a look at that over here: http://www.comixfan.com/xfan/forums/showthread.php?t=40825 I also wrote a PlayStation party-games piece at PlayStation.com http://uk.playstation.com/pdcf/index.jhtml?locale=en_GB – ‘A PlayStation Party for all’. The site makes it impossible to direct link it, but it’s easy enough to find as it’s a recent feature.

And that’s me done for now. Ironically, this is an update of sorts, isn’t it? Handy. Anyhoo, time to take advantage of the pain-killing time. Eat or Wii? Decisions decisions…