This week’s update is just as its title suggests; nothing long and rambling (or that’s certainly what I plan – we’ll see how long this is by the time I’m done). Instead, this will be a nice short bullet point batch of stuff off the top of my head. Not sure where it’ll take me, but we’ll see.

– I’ve just finished Issue Three of the secret comic series I’m being paid to write. Despite the large amount of research it’s taking, I’m enjoying it in the way I hoped I would enjoy monthly comic book writing. It’s a massive challenge; I’ve never had to write monthly scripts before, it’s in a genre I’ve never done and there are certain things I need to do to get from point A to B, but despite my early worries that I’d be hopeless at it, it’s actually something I look forward to each month. And I’m given a large amount of freedom, which personalises the project largely. Also worth noting is that I’m working on another series of my own making at the same time and finding it doesn’t conflict with this one. I seem to have certain ‘frames of mind’ for each one as they’re totally different types of story. All this bodes well for something I really want to do full time, as a comic writer really cant survive off one book a month and many pros write around 2-3+ per month with other work on the side. Here’s hoping I’ll be able to get to that position in the near future.

– If you’ve manage to go to the cinema any time soon, try and catch The Departed. If possible, at least twice (along with the superb Chinese original, Infernal Affairs). The first time will potentially be a bit manic, especially the end which borders on farcical. But the second time the breadth of the themes and subtleties of the amazing script become clear. The performances are amazing, the soundtrack excellent and there are moments so memorable you’ll take them away and talk about them for months.

– After selling my Nintendo GameCube and several games, my Nintendo Wii fund has reached around £150 in credit notes. Which means I’m now within spitting distance of being able to afford one come its December release, without actually spending more than £20 of my own money. If you don’t know what a Wii is, I guarantee you will by Christmas. The marketing will be beyond huge.

– Even though I’ve been reading comic books for over 23 years, I went to my very first signing this week; pro comic artist Sean Phillips. Great guy, very friendly. He signed some stuff for me and then drew some sketches on the fly (only took him a few mins to do), all of which look AMAZING (one I cant show here as it’s a present for a friend). Sadly the reproduction quality makes them suffer a little here, but you get the idea: 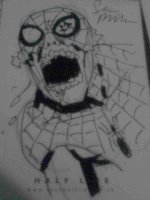 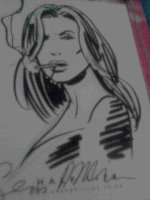 You can check out Sean’s blog over here: http://surebeatsworking.blogspot.com/

– I STILL haven’t done my self assessment tax forms online for the sins of being self employed. This is the number two reason why self employment isn’t all fun and games (the first reason being the problems of actually keeping the money coming in). Next week, dammit, I promise.

– I recently got some promising news that one of my short story comic scripts could be picked up by another indy publisher, although it’s hinging on a large and important factor before it gets greenlit. Fingers crossed. I’ll let you know how it goes…

– Videogame, Bully, (renamed ‘Canis Canem Edit’ in the UK) has picked up a lot of bad press, long before its release this week. The reason being, the moral majority (Daily Mail, lawyer Jack Thompson, Middle America etc) thought it was a “bully sim” or worse, a “Columbine simulator”. These claims were made not only without any knowledge of the game’s content, but also without anyone actually playing the game and (failed) attempts were made to ban it (although high street chain Currys decided to ‘take a moral high ground’ and refuse to stock it, for utterly spurious, hypocritical and weak willed reasons). So when it was reviewed and released, it was to much egg on face to the aforementioned dopes that it was none of the above; it’s about as controversial and ‘harmful’ as an average episode of Grange Hill… or maybe even Byker Grove. And it’s a really good, well thought out and and witty game to boot, actively DISCOURAGING bullying. What really pisses me off about the large scapegoating of this innocent game is not just the fact it was prejudged without any basis in little things like ‘fact’, but the VERY FIRST PRESS RELEASE said it was nothing to do with encouraging bullying people but rather, standing up to them. This is what developer/publisher of the game wrote in (wait for it) MAY 2005. That’s right, OVER A WHOLE YEAR BEFORE THE GAME’S RELEASE:

“As a troublesome schoolboy, you’ll laugh and cringe as you stand up to bullies, get picked on by teachers, play pranks on malicious kids, win or lose the girl, and ultimately learn to navigate the obstacles of the fictitious reform school, Bullworth Academy.”

Now, regardless of this very clear statement about the content, people tried to wrap this game as ‘violent and a morally repugnant encouragement of bullying’ just because of its title. “Columbine simulator”? Bit like saying based off the title, something like ‘Star Wars’ encourages real life wars, no? Foolishness.

– I made the bizarre realisation that writing fiction on a regular basis requires me to do a lot of stuff that would sound strange to many people. So I decided to share it. For example, this week I spent nearly a day researching interrogation and torture methods used by world government agencies. It was a… eye opening experience. Needless to say, I now know the basic methods of how to perform an interrogation that leaves no physical marks or scars, yet plenty of mental ones, using just water, a cloth and two pairs of handcuffs. Hmm.

Wow, this entry turned out to be quite long after all. Even though it only took about 10 minutes to write (and 20 to edit. Bah).