I’ve published this before elsewhere, but seeing as this is my own space with my own publishing terms, I can do a bit more with it now.

Bascially, there’s a ton of stuff that’s kinda sitting in the creative womb right now, hopefully birthing around the next 6 months (if that’s not jinxed them). The closest to completion is a comic book story, Bad Luck Inc., to be published in the forthcoming Futurius: Tales From the Plex Vol2 anthology (visit: http://www.futurius.com/)

So here’s a small preview sample to get the ball rolling. First is the typical blurb you would find on the back, followed by some of the pages drawn by the lovely and talented Yui Marr. The pages are unlettered, which means you’ll be matching the script to the pictures, but obviously when they’re complete it’ll all be in one form.

What would you do with it?

Spread diseases only you have the cure for?

This is the world of Bad Luck Inc., a global corporation that creates the Earth’s ‘luck’, offering ultimate control for the highest bidder. Conflicts are created. People are murdered. Corruption. Genocide. War. Death. All for profit. The powerful stay powerful. The rich stay rich. Everyone else suffers in a shallow grave.

This is our world. And there is no such thing as coincidence. No such thing as luck. Just new methods of control. And that control is never in our hands.

What would you do if Bad Luck Inc. owned you?

What would you do if you wanted to leave? 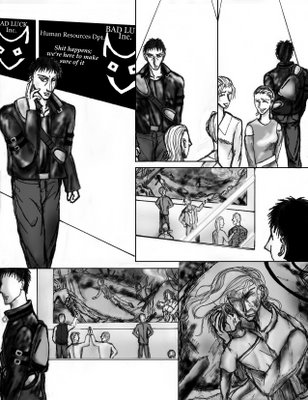 Panel 1
Neon in a hall now, walking, still pinching the earpiece in his ear, a little worried. His body language is tense and stiff. On the wall of the corridor, we see a large sign which is the department label. It says Bad Luck Inc. Human Resources Dpt. “Shit happens; we’re here to make sure of it.” We also get to see the Bad Luck Inc insignia next to it, which is a black cat esque facial figure, with a pair of snake-eyed dice shining from it. It’s meant to be creepy and with eyes that follow us everywhere, very disconcerting.

CAPTION:
We’ve been running things for years away from the public eye. Decades. God, I don’t even know how long anymore. All I know is that I’ve had enough.

VOICE [electrical static style coming from earpiece]:
And loosen up a glom. You’re not supposed to look like you’re about to illegally leave the largest and unleavable conglomerate on earth.

Panel 2
Further down the corridor, a couple of people have started to come in the opposite (right side) direction, chatting away to each other. Neon tries to loosen his body a little, looking still a tiny bit nervous, but less stiff than the last panel.

CAPTION:
Terrorism? How obvious. How passé. How early 21st century.
But Determinism… now, that’s the future.

NEON [whisper]:
Trimurti, but I’ve never done anything like this before, okay?

Panel 3
The people are walking past Neon now, who’s looking happy in that forced way people do when they’re trying to convince others of their innocence. They’re not actually paying him much attention anyway, deep in their own conversation.

CAPTION:
We change things. Mould the impossible and improbable into reality. Dictate the future. Ultimate control for the highest bidder.

Panel 4
The people have gone past now, we’re starting to see a room coming up, with a few people watching a large high definition holo TV, of which appears to have a large scale disaster on it. The people watching are cheering, looking happy.

CAPTION:
Nanite infections. Untraceable disease bombs. ‘Natural’ disasters. Sometimes just good old fashioned payoffs, albeit on a very large scale, will do. Hell, with all that high technology out there, who do you think keeps Vegas in business these days?

Panel 5
Neon walks past the room, a bit more casual now, we see the people in there high-fiving each other and raising a toast to the TV, which is now clearly showing a lot of suffering from the disaster.

CAPTION:
This is not a world I want to be part of anymore. This isn’t how it should be. Jesus Christ, I have a wife and little girl.

Panel 6
A close up of the TV, which has a picture of a little boy, bloody and unconscious, his mother holding him, crying. This has to be powerfully emotive.

CAPTION:
No job is worth your soul.

[All work published here is ©2006 ~ Corey Brotherson, unless noted otherwise and cannot be used without permission. Thank you.]

After an extremely difficult and emotional few mon